Dragon, Dragon and Other Tales by John Gardner 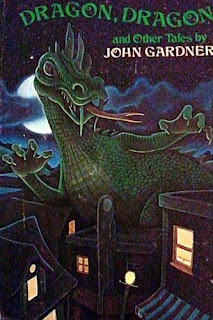 John Gardner was a larger-than-life literary figure in the U.S. in the 1970s and early 1980s, until his untimely death at the age of 49 in a motorcycle accident in September 1982. He published around a dozen novels, a few collections, some nonfiction books (on writing), some translations (The Complete Works of the Gawain Poet; The Alliterative Morte Arthur and Other Middle English Poems, and Gilgamesh), and one biography (The Life and Times of Chaucer).  Gardner also published some books of modern-styled fairy tales. Dragon, Dragon and Other Tales (1975) came out from the distinguish literary publisher Alfred A. Knopf. It collects four fairly short tales, and is illustrated by Charles Shields.  The illustrations, excepting the cover, look dated and are unappealing. The tales are pretty good. The title story and the second one ("The Tailor and the Giant") concern kingdoms preyed upon by a dragon in the first, and a giant in the second. They are well-done, and refreshingly not what the reader might expect them to be. The remaining two stories are a bit more original. In the third, a deceitful miller's mule tries to get his owner killed; and in the fourth, the final tale in the book, a young chimney-sweep saves the last piece of daylight before the world goes dark. I enjoyed the collection and will continue reading more of Gardner's fairy tales.
Posted by Bibliopolitan at 11:29 AM

Email ThisBlogThis!Share to TwitterShare to FacebookShare to Pinterest
Labels: Dragon Dragon and Other Tales, John Gardner