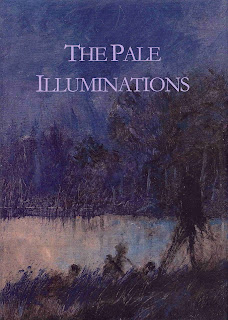 Robert Morgan was the uncredited editor of three anthologies reviewed here previously, all of which I greatly enjoyed, so it's nice to see him take credit for them all on this new volume, The Pale Illuminations, which takes its title from a quote from a Charles Williams novel All Hallow's Eve (1945): "She was free from the pale illumination of the dead." Sadly, this collection seems to be the lesser of the four, though it's not a bad compilation at all. All four stories seemed to me a bit off structurally, or a bit too unfocused. The Peter Bell tale drags on for too long, while the Reggie Oliver story felt too short.  Mark Valentine's tale, after an uncharacteristically slow start, comes to life too late, and the ending almost but not quite makes the whole work.  The Derek John story has some interesting sections, but doesn't hang together in toto.  Still a decent anthology, but not quite up to the higher levels of the other three.

Posted by Bibliopolitan at 11:28 PM