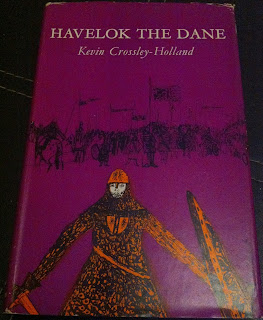 Continuing on my reading foray into medieval things, I took up another book by Kevin Crossley-Holland.  This is Havelock the Dane (1964), which was Crossley-Holland's first book, and is a retelling of a legend originating around Lincolnshire (and the town of Grimsby), written down as a poem in the late thirteenth century. It's an almost-typical medieval story. Two kings, one in England and the other in Denmark, are dying, and appoint a Regent or Steward to rule the realm while their children grow up. The Regent (in England) and the Steward (in Denmark)  both prove evil and treacherous, and in England the princess Goldborough is imprisoned, while in Denmark the two princesses are murdered while their brother prince Havelok survives only because he is taken away to England by the kindly fisherman who the Steward had ordered to kill the boy. Inevitably, Goldborough and Havelok are united, and both regain the rule of their lands. Overall it's a decent romance but not on the high level of Beowulf or Sir Gawain and the Green Knight.

Posted by Bibliopolitan at 9:13 AM