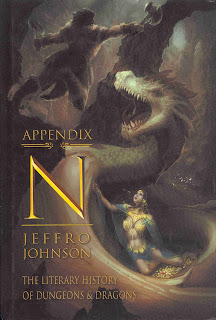 Appendix N is a book in which Jeffro Johnson reviews the forty-three works and authors that were listed (as "Appendix N") in 1979 by Dungeons & Dragons creator Gary Gygax as the seminal influences on his famous role-playing game.  It covers well-known classic authors such as Poul Anderson, Edgar Rice Burroughs, Robert E. Howard, H.P. Lovecraft, Michael Moorcock, J.R.R. Tolkien, and Jack Vance, and less-remembered authors such as Gardner Fox, Fletcher Pratt, and Margaret St. Clair.

Sadly, the book is written in confessional self-important blog style, and each entry is filled with irrelevant anecdotes and asides. Some entries seem to have very little content about their supposed subjects. I found the book disappointing and completely exasperating. A much better thing to do that read this book is to take the "Appendix N" list and read the authors.  One will learn a lot more this way.

Posted by Bibliopolitan at 9:31 PM