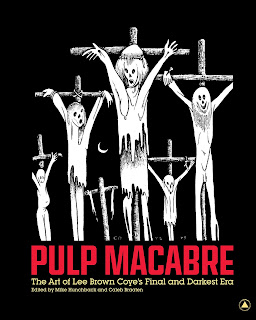 Recent years has seen a resurgence of interest in artist Lee Brown Coye (1907-1981).  First there was the illustrated biography Arts Unknown: The Life and Art of Lee Brown Coye (2005), by Luis Ortiz. In 2011, Centipede Press published a large retrospective of Coye's art.  And more recently, Mike Hunchback and Caleb Braaten have published Pulp Macabre: The Art of Lee Brown Coye's Final and Darkest Era (2015).  All three of these volumes have their attractions.


Coye's macabre artwork is perhaps best known from its appearance in three anthologies edited by August Derleth in the 1940s—including Sleep No More (1944), Who Knocks? (1946), and The Night Side (1947)—and in Weird Tales magazine from 1945 through 1952.  Coye also did illustrations for Arkham House books, including Three Tales of Horror (1967) by H.P. Lovecraft.

Pulp Macabre focuses on the Coye's projects from the 1970s, including work published in Carcosa Press books and Whispers magazine. Coye had a stroke in the late 70s, and tried to turn back to art, but the examples shown here are sketchier than was Coye's wont, though their style is still characteristically Coye's. Still Pulp Macabre makes for another fine Coye collection.
Posted by Bibliopolitan at 12:35 PM