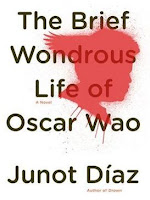 The first words I read by Junot Diaz were his supposed confession of having been raped as a child, published in the April 16, 2018 issue of The New Yorker.  All the Holden Caulfield bells went off in my mind:  Phoney!  Sexual assault is charge to be taken seriously, but in this case it seemed that Diaz was making a generic and contrived complaint, one that just didn't (for me) ring true. Soon afterwards some charges against Diaz himself of sexual abuse surfaced, which made his "confession" seem even more like a calculated pre-emptive strike for sympathy.  Be that as it may, I thought I'd give one of his books a read, and by most accounts the book to read was his novel The Brief Wondrous Life of Oscar Wao (2007). It won the Pulitzer Prize for Fiction and the National Book Critics Circle Award.  Well I'm now completely baffled as to why this book won any award at all.  It's a poorly written account of the sad (and not short enough) life of a Dominican geek in New Jersey, with the author sneering at his characters all of the time.  If something as repulsive as  MTV's Jersey Shore had been based on a novel, then the novel would share a kinship with The Brief Wondrous Life of Oscar Wao. 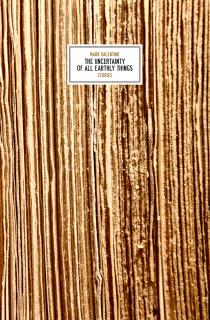 After struggling to get through Diaz's book, what a great pleasure to read The Uncertainty of All Earthly Things (2018), a short story collection by British writer Mark Valentine.  It contains twelve stories, all originally published in small press sources between 2013 and 2017, plus a section "Notes on the Border" comprising some diary entries from 2001 through 2003.  There is more talent and artistry in a few pages of Valentine's prose than could be found in an entire novel by Diaz.  The Uncertainty of All Earthly Things was published in a limited edition of 199 numbered copies. Why is there such a disparity, and one in the wrong direction, between the receptions of Diaz and Valentine? Valentine is a literary writer, while Diaz is schlockmeister of the tee-vee generation.  It's a sad world that Diaz is acclaimed while Valentine is read only by the cognioscenti.

Posted by Bibliopolitan at 1:31 PM

Email ThisBlogThis!Share to TwitterShare to FacebookShare to Pinterest
Labels: Junot Diaz, Mark Valentine, The Brief Wondrous Life of Oscar Wao, The Uncertainty of All Earthly Things