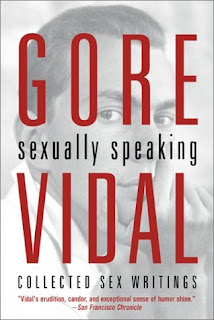 Gore Vidal (1925-2012) wrote novels, essays, plays, screenplays, etc.; he was an all-about man-of-letters, with a polished style and a quick wit.  Of all his writings, I find his essays to be of the most consistent high quality.  This volume, Gore Vidal: Sexually Speaking (1999), edited by Donald Weise, collects Vidal's writings on sex, mostly on same-sex relations.  Vidal had some interesting attitudes.  Though he spent some five decades with a male partner, he shunned the term "gay" and "homosexual" (as a noun).  He was perfectly open about his relations with men, but he would say there are homosexual acts but not homosexuals, even as many others accepted the term "gay" or "homosexual" as a badge of honor.

This book contains fourteen essays, and three long interviews. The standout essays are "Sex Is Politics" and "The Birds and the Bees", but Vidal is also very acute in writing about people he knew, from Eleanor Roosevelt, to Tennessee Williams and W. Somerset Maugham.  The interviews are somewhat lesser.  Vidal is at his best in writing prose.

A few of Vidal's stray statements on modern culture strike me as worth repeating for their self-evident truths:

"If I were dictator or president or otherwise in control of a well-run country . . . I would not allow any religious group to have schools. And without schools, there would be no Catholic Church in two generations because their doctrines are so insane that nobody in his right mind would accept them.  Then I would tax all churches heavily. That would reduce their influence by 90 percent." (p. 238)


"I don’t think Western Civilization as I’ve understood it and cared for it will continue. I don’t really in my mind’s eye see the human race in existence for another hundred years, right or wrong. When you feel like this, it makes it very difficult to create a work of art because I think the principal impulse to create is the will to make something permanent, even though you know that from the stand-point of eternity, nothing is permanent. But certainly in terms of the generations of man, as the Bible would put it, you do have a sense of continuing and addressing future generations. And so you will not become entirely extinct because of what you have wrought. Well, if you don’t have that sense or if you are fairly convinced that there is going to be no future either for the written word as you practice it or for the human race as such, well, this sort of takes the moxie out of you. And I don’t think I’m the only one to feel this.  I think that the deterioration in all the arts that we are now seeing is a sign of this." (p. 250)
Posted by Bibliopolitan at 7:41 PM