The Secret Lives of Authors 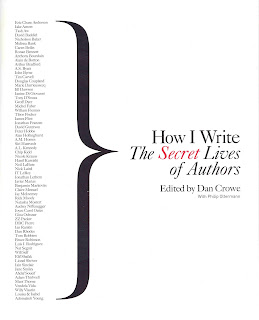 How I Write: The Secret Lives of Writers (2007), edited by Dan Crowe, is a kind of coffee table book about writers and their writing spaces—their desks, their surroundings, their rituals, and their favored desk-top tchotkes.  Basically, the editor wrote to sixty-some-odd writers about their daily work as writers. There are some well-known authors included, but a lot of the names are of less-known, and all of them are decidedly pretentious in a literary way (i.e., genre authors were evidently not asked).

As an exercise, I though the book sounded interesting, but the end-result is considerably less engaging.  One goes from such insights as Lionel Shriver's note that "having the nerve to write yet another book in a world already drowning in blather requires bravery, arrogance, and willful naiveté" to Tim Carvell's "the only way to write is to first spend a considerable amount of time not writing." Well, both statements are true, but it's rather sad that they represent the best this book has to offer.
Posted by Bibliopolitan at 8:25 PM

Email ThisBlogThis!Share to TwitterShare to FacebookShare to Pinterest
Labels: Dan Crowe, How I Write