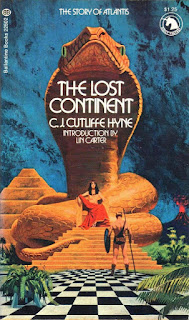 The Lost Continent by C.J. Cutliffe Hyne is reputed to be the best rendering of the Atlantis myth into novel form. It was originally serialized in Pearson's Magazine in 1899, and appeared in book form the following year.  It tells the story of Deucalion, the priestly leader of the Atlantian colony in Yucatan, returning home after twenty years, where he is courted by the upstart empress Phorenice, herself guilty of many sins against the old codes of Atlantis, including self-deification. The story has several unfortunate tropes of popular adventure fiction of its time, including the quick love from the lifelong bachelor Deucalion for a rebel woman he encounters only briefly, which provides (supposed) motivation for several of his subsequent actions. Still, the book remains a good example of its type and era. Basically The Lost Continent belongs on the shelf next to the novels of H. Rider Haggard.  While it was directly inspired by the Victorian pseudoscience Atlantis: The Antidiluvian World (1882) by Ignatius Donnelly, it in turn inspired some of the novels of Edgar Rice Burroughs.

Posted by Bibliopolitan at 5:34 PM