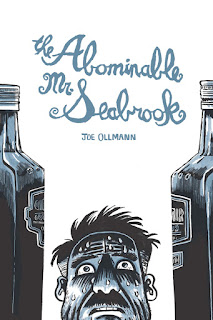 William Seabrook (1884-1945) was a tabloid writer who also wrote tabloid-styled books, about voodoo, witchcraft, and being in an asylum. During the 1930s he was a popular figure, and he had friendships with many people ranging from Aleister Crowley to Gertrude Stein. Joe Ollmann is comics illustrator who has written and illustrated a book titled The Abominable Mr. Seabrook.  The artwork is grubby and unpleasant (even a blurb on this book notes that Ollmann "draws with a gnarly, blunt line and his characters have a misshapen, antagonistic appearance"); the story is grossly simplified in ways (the mantra in the first part is to describe Seabrook repeatedly as "writer, explorer, alcoholic, sadist, cannibal").  It all leads up to a laughable armchair denouement that describes Seabrook's peculiarities as being the result of having an unusually large sex organ, and Ollmann trumpets in his notes that "I have never seen this fact published anywhere else in anything I've read about Seabrook." Searbook deserves much better than this kind of crap treatment.

Posted by Bibliopolitan at 1:55 PM