The Wanderer in Unknown Realms (2013) by John Connolly is a horror novella, concerning a book collector, Lionel Maulding.  Set just after World War I, an injured former soldier, Mr. Soter, is hired by Maulding’s lawyer to find the usually reclusive but now entirely missing book collector. Soter gradually discovers that Maulding was searching for a particularly rare and expensive occult volume often referred to as the Atlas of Unknown Realms. As Soter delves into the world of eclectic book dealers and even seedier book scouts, he finds his own perception of reality coming apart, an apparent effect of the book he is searching for. An interesting and diverting tale, even though it doesn’t cohere entirely well.

Oxford Days: An Inclination (2002) by Paul West is a kaleidoscopic memoir of West’s time studying at Oxford University. I’ve had a copy and intended to read it for some years. After West’s recent passing provoked eulogies in the press, I pulled it off the shelves at long last. Most reviewers always comment on West’s exquisite or elegant prose, but I confess that I find his prose highly allusive, and while smoothly readable, it is rather aloof, and puts a barrier of artifice between the writer and the reader. Thus there is a distance purposefully placed to dull the edges of meaning, and in a memoir already short on facts and details, it leaves the reader frustrated. For example, if one doesn’t already understand the differing and idiosyncratic Oxford or Cambridge educational set-ups, West’s explanations won’t help much. And even West’s time at Oxford is hard to pin down—apparently he arrived in 1950, and departed two years later in 1952 for Columbia University in New York, where he completed his M.A. in comparative literature. Yet there are times when West lets the reader see into his evolving feelings about literature and Oxford itself, and these are the most interesting parts of the book. In the sixth section, however, he tries to capture the various voices of “souls” around him—a rector, a college scout, a custodian, a dining hall scout, a groundsman, etc. This section is the low point of the book.  These vignettes feel merely like exercises in cleverness—empty, intrusive, and distracting. A better structure and focus could have made this a much better book. 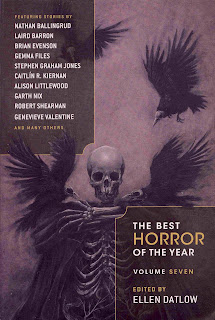 The Best Horror of the Year: Volume Seven (2015), edited by Ellen Datlow, continues her long tradition of editing an annual selection of the best-of-the-year in horror. I offer a review here of only the first half of the book, and hope to persevere and finish it, commenting on the rest of the stories in the future. The problem has been that none of the stories I have read have grabbed me, and a large number are real duds, including a tediously dull story about a sin-eater (“A Dweller in Amenty” by Genevieve Valentine); a somnolent trick story of a recurring awakening that plays out with some variations but reads like a script for a bad television show (“Allochton” by Livia Llewellyn); and the appropriately-titled “This Is Not for You” by Gemma Files.  Caitlyn R. Kiernan’s “Interstate Love Song (Murder Ballad No. 8)” is a yawn-worthy tale of twin female serial killers; the news that Kiernan is expanding this story into her next novel is even more unexciting. Some of the other stories are merely readable while remaining completely forgettable. Was 2014 really such a bad year for horror fiction? By the first half of this annual retrospective I’d think it was. But I will read the rest of Datlow’s best, hoping for some better stories.


Posted by Bibliopolitan at 1:20 AM