Fractured Fairy Tales (1997), told by A.J. Jacobs.  This is an odd production. “Fractured Fairy Tales” was an independent segment of The Rocky and Bullwinkle Show, which ran on American television for five seasons from 1959-64. Some ninety-one short episodes were produced, narrated by Edward Everett Horton. Just what this collection is supposed to be is not clearly defined. The authorship is credited to A.J. Jacobs, who was born in 1968, after the series had aired.  But the book is copyrighted to Ward Productions, and Jay Ward gets a kind of author blurb on the rear flap despite the (unstated) fact that he died in 1989. The book contains twenty five stories, each usually only four or five pages long, and they are much in the style of the original productions, but there are a good number of pop culture references (to “action figures,” “jazzercise,” to the zip code “90210”)  that date to the 1990s rather than the early 1960s.  Most of the stories are moderately amusing, but one misses the velvety narrative voice of Edward Everett Horton, and the simple visual style, and the familiar character voices of people like June Foray or Daws Butler. Reading these stories on their own seems like a one dimensional experience compared to the much more appealing animated episodes.

How to Fake a Moon Landing: Exposing the Myths of Science Denial (2013), by Darryl Cunningham.  This small book, in graphic novel format, exposes the scientific illiteracy that is rampant in modern popular culture, covering eight topics in particular:  the idea that the moon landing was a hoax; that (1) homeopathy or (2) chiropracty are worthwhile medical treatment options; that vaccines cause autism; as well as taking on the supporters of fracking and the deniers of evolution, climate change, and science.


I can’t recommend this book enough.  It should be taught in every elementary school in the . Darryl Cunningham has done another similar book The Age of Selfishness: Ayn Rand, Morality, and the Financial Crisis, which I’m looking forward to reading.

The Prince of the Aquamarines & The Invisible Prince (2015) by Louise Cavelier Levesque, translated by Ruth Berman. These two fairy tales date from the first half of the eighteenth century, during that flowering of interest in the writing of fairy tales in .  Neither has appeared before in full in English—the second tale, “The Invisible Prince,” was included by Andrew Lang in much abridged form in The Yellow Fairy Book. They are primarily of historical interest, but it’s good to have them available, and the translator Ruth Berman does a fine job in an afterword of discussing the historical context of the two tales.

Written in Darkness (2014) by Mark Samuels. A collection of nine new stories by Samuels, with an introduction by Reggie Oliver. Samuels first collection The White Hands and Other Weird Tales (2003) was a very promising debut, but it was followed by some much less interesting work (perhaps early work?), including Black Altars (2003) and the novella The Face of Twilight (2006), so that by the time Glyphotech (2008) came out I’d ceased paying attention to Samuels’s work.  The Man Who Collected Machen and Other Stories (2010) didn’t seem attractive either, but I thought I’d check in again when Written in Darkness came out. And I’m glad I did. This is Samuels at the top of his form, and seeing that The Man Who Collected Machen and Other Stories is out in an affordable trade paperback edition, I plan to try it out too. 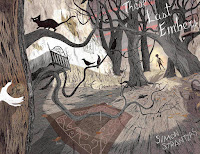 These Last Embers (2015) by Simon Strantzs, with wraparound cover art by Drazen Kozjan. Simon Strantzas is a Canadian author of four collections of stories, and Drazen Kozjan is a Canadian illustrator. This is the first of a series of chapbooks from a Canadian small press. Strantzas story is good, but not amongst his best; it is too short (a mere ten pages of text) to be really effective. Kozjan’s wraparound cover is outstanding. Yet the story and illustration seem mismatched in tone. Still I look forward to future chapbooks from this publisher.
Posted by Bibliopolitan at 11:28 PM